The Bath Novels of Lady A~ / TBNLA™

Predicated upon a real-life drama that occurred in Jane Austen’s well-documented history, and two hundred years since her first ‘child’ of the ‘sacred six’ was acquired by military publisher Thomas Egerton, comes the debut of an enigmatic companion set of seven original Regaustenian novels that freshly emulate the style of those six perfect classics. The Bath Novels of Lady A~ is so called because the collection is implicitly linked to Jane Austen's ten-year ‘unproductive’ sojourn, which started in Bath, and the modish Regency conversion of her pseudonym ‘a Lady’ to ‘Lady A~’. Though it was thought Lady A~’s pen lay fallow all through that decade-long silence, the revelation of The Bath Novels of Lady A~ (TBNLA) invites the reader to imagine exactly the opposite. Indeed what such devilish genius might have done with high frustration and low event in fatiguing places—and at the nib of a very polemical pen—may yet be discovered in TBNLA’s seven ‘Classic Companions’...

Janeites! If you are in any way enamored of our very civil ‘companion’ movement, pray, link with us too(!), and become a Ladeite. 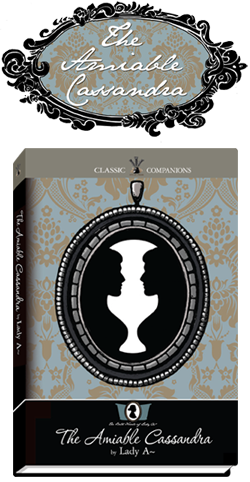 The Amiable Cassandra/ Lady A~’s captivating ‘Cinderella’ account of Jane Austen’s life as she might have fashioned it in fiction. Blending the most bewitching elements of Austen’s six novels and ‘juvenilia’, her unfinished work and her own intriguing and most eventful history, The Amiable Cassandra delivers a heroine and a hero sporting all the (as yet) unrivaled qualities that Janeites have come to love best in Austen and her most beloved protagonists. Published purposely in advance of the bicentenary of Austen’s passing in 1817, this novel not only celebrates her remarkable life as only she might have wittily imagined it—for herself—for her allies—and, notably, for her enemies, but it faithfully and ingeniously fills the ‘Jane Void’ that left so much wanting after her premature death. 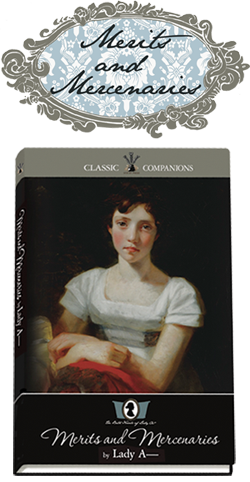 Merits and Mercenaries/ ‘Classic Companion I’™, The Bath Novels of Lady A~’s debut novel, is a dashing tale about the perplexing pursuit of love and self-discovery, which races for resolution—upon comedy and drama—across both town and country. As protagonists William Halford and Katherine Huntley seek some happy end, a host of vivid villains strive to perilously prevent it—while the shadow of a most menacing secret relentlessly stalks the story’s entire cast.